Leeds based psych rock group The HookWorms headlined a 3 band roster at Clwb Ifor Bach in an sonic adventure through effect, peaking lights and wondrous sound.

Off of the back of the wave making album ‘Pearl Mystic’ – The HW’s ( only by their initials in an affront to pseudo celebrity) are looking to build on a stellar reputation with their 11 date ‘Hum’ Tour. The Hum is a ferocious and ominous concept -based on a phenomenon that sweeps the world mysteriously… described thus in the HW’s press release:

“As many as 11% of people can hear the Hum. Reported in the UK and USA since the 1940’s, the phenomena of these invasive low frequency Drones – responsible for insanity and, in extreme cases, even suicide – has many theories ranging from mechanical instruments to the clash of ocean waves, but nethertheless remains that rarest of things: an unexplainable anomaly…”

Having only briefly skimmed through ‘Pearl Mystic’  prior to the show – I was entering a somewhat unknown quantity. But as the raging tension of Away / Towards rippled through I could tell I was in for something special. One of the best album openers I have heard in years.

“we were writing pearl mystic to an audience in the same way your diary has an audience” – said HW’s guitarists SS “It’s written but if noone ever reads it that’s not a big deal. This time round though we knew we had a really clear audience, so the Hum is really bout different freedoms and constraints”

Their performance was ably augmented by Kogumaza and Scarlet Rascal, (the latter the best looking band I have ever seen) making it a mouthwatering night of shoegaze, modern psychedelia, Krautrock, fuzz and beautiful noise. As a warning, don’t make eye contact with the hypnotic gaze of Scarlet Rascal’s lead singer Luke Brooks –  you may never be able to break it. (Bit like the weeping angels off of Dr Who).

The HW’s latest single, ‘On Leaving’ demonstrates perfectly what you are in for on this tour. The immense wah- wah’d wall of sound and tremulous building of energy are as what Loud and Quiet Magazine describes as ‘a firework going off underwater’.  The textures of their tracks defy logic – a cross fade of Bridget Riley’s work smashing into Piet Mondrian’s to create something unique, fizzing and very loud.

‘The Impasse’ (MJ describes this as sounding like suicide if they had a full band) and ‘On leaving’ are the two singles available online ..They are both absolutely fantastic. Can’t wait to get my hands on the 180g of the album and destroy some speakers…

There are similarities between Kogumaza and Hookworms and the influence is obvious. Kogazuma’s ambient guitar dronings have clearly influenced their work – and is acknowledged as such by the band. 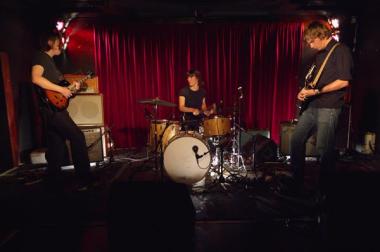 The HW’s cite them as “an utterly mind-blowing band and wonderful people. We wouldn’t be a band if it wasn’t for them and they mean so much to us.” Kogumaza are similarly a noise rock drone band – you think you have felt tension in music then sit through their set as it reaches its peak. The music rises and rise before you until its finale, until you are cut off you finally realise what you have been party to. As exhausting as it is rewarding. They released a split single in 2012 with the HW’s – a familiar story painting instrumental track called Ursids.

‘Form and Function’ is a personal favorite of mine from Pearl Mystic. The most lyrical of the record is imbued with call and response lyricism that flex with ease and enjoyment. Just as you think the shriek of guitar had plateaued – the tension in the track rises again, ticking over metronomic drums – breaking out into a wonderful sunshine laden solo.

The gig was a strange but alluring amalgam of neo-psychedelic rock, drone, shoegaze, proto-punk, garage rock, Washington DC hardcore, 80’s British Spacerock and several other genres (breathe) too numerous to mention. I felt like I was party to a bedroom jam that just went on and on and on. It was a wonderful, almost transcendental experience and far removed from normal deadpan bands.

The claustrophobic atmosphere of the club augmented this experience and I could really feel myself getting sucked in as the kaleidoscopic guitars played havoc with the audience and the mesmeric echo of fuzz-blitz engulfed all who were party to the gig. As the track ‘II’ melts away leaving behind a dazed listener, they break into the  atmospheric sounds the HW’s bring us into ‘What we talk about’.

The Hum is a departure from Pearl Mystic – as guitarist SS describes it, “The Hum Is really about freedom and constraint.” As the driving drums of ‘The Impasse’ opens and MJ’s sonorous lyrics rocket through it is self evident that the Band have developed into their own, forging their own personality.

The band is extremely proficient in their musical talent – and Lyricism as lead singer (somewhat cryptically named) MJ slows things down with ‘What We Talk About’ – a rare glimpse of his talent as a lyricist that isn’t overshadowed by acerbic organ or reverberations of noise & echo of voice.

What was also wonderful was the echoing, reverberating lyrics of MJ are complex and deal with existential themes (when you can hear them) and clearly depression as they are more often so distorted and contorted out of all recognition you simply have to embrace the music and let yourself be carried downstream at a furious pace. Their live performance grips you and refuses to let you go.

Unfortunately the singer’s voice Matt has broke down towards the end of their tour and ultimately I can’t say I am that surprised – the man puts so much gusto and energy into his hi-octane vocals that it must be an ongoing job to keep it at its best.

I can certainly say I am glad to have caught them in full swing. Get the Record here: http://www.piccadillyrecords.com/products/Hookworms-TheHumDeluxeTransparentVinylEditionWithBonus7-WeirdWorld-99096.html

For All Things Hookworms